We are an urban homestead based on natural, holistic and sustainable principles. Our livestock includes chickens & honey bees and we cultivate fruits, vegetables and kitchen herbs.

Our original plans for urban-chickens did not have a set quantity to the flock – we just knew we wanted them. After lots of on-line research and even more reading of books, we came up with the initial breeds of brown/tinted egg layers we wanted. Then as we first created a Facebook page and started posting about our plans for urban-chickens, the need for a brand, logo, icon, etc. became evident as something that was missing. After some initial sketches and writings, we were happy with “7 Heavenly hens tending a Downtown Abq. Garden”. We liked it. It assigned the number of biblical perfection, 7, to the quantity of hens we would have (7 days of the week 1 egg/day ?, okay that’s a stretch) Also we liked the Downtown part which emphasizes we’re not in the country (although plans are there to move to the country some time). So, as we continued with FB posts and got more and more sucked into Urban homesteaders and country Farmville, we saw the need to condense the original name to something simpler. Hence, where we are today – 7 Heavenly Hens Garden. Less words = simple and to the point, it says it all.

So back to the chickens. Here is the list and images of what the original flock was to be made of (yes, that hints at change of plans have occurred). These are not our girls but are rather, the most vivid examples of what we want in our flock. 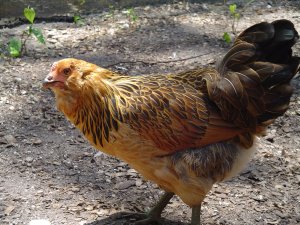 Causing dialogue and eliciting responses about living design while presenting various observations for critique, consideration, solutions and some good humor!

My southern style of living through gardening, cooking and diy projects. Stop by often to see what I am digging into during my free time.

Living off the land when the land is a small suburban lot.

Bees, Hives, Swarms, and Everything under the Sun

Exploring sustainability in Sydney, and down south

Sharing the often fun, sometimes tragic but always fabulous life in the country!

A dive into all things feathered and farming...