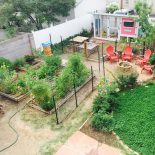 We are an urban homestead based on natural, holistic and sustainable principles. Our livestock includes chickens & honey bees and we cultivate fruits, vegetables and kitchen herbs.

01 – Conferences / Public outreach / Recognition; The Year in Review at 7HH-G

2015 was a busy year for our family and myself when it came to our overall progress with our urban farm. We got to practice public outreach, attended conferences and received some recognition in the media for our efforts here at 7HH-G.

The new year started off with a couple of conferences I attended that were very educational as well as fun. First up was the New Mexico Beekeepers Association Annual meeting here in Albuquerque – this two day event in early February was full of great speakers and networking with beeks from throughout the state in addition to some from neighboring states. The best part of the conference was hearing from keynote speaker Marla Spivak from the University of Minnesota. The upcoming 2016 conference should be another great one in early February – our local ABQbeeks and NM Association are a huge resource to local beekeepers in our state.  One other conference later on in February was the New Mexico Organic Farmers Conference, again, another two day event. Lots of presentations on everything about organic growing on a farm. This was especially rewarding to meet new friends face to face and get to network with like-minded men and women who care about our earth. The keynote speaker who really impressed me was “Coach” Mark Smallwood from the Rodale Institute. These two days were very inspiring for me – the urban farmer on my 1/14 acre hobby farm. I plan to attend the 2016 event again.

Public outreach for interests of 7HH-G covered composting and beekeeping. For our honey bee world , we attended several ABQbeeks meetings which were held monthly from March thru October. In early spring, March 22nd to be exact, we had our spring inspection of our Warre hive and had a few other beekeepers interested in the Warre hive attend with us – that was a lot of fun. Then in late August, our apiary here at 7HH-G was selected to be on the 2015 Apiary tour sponsored by the ABQbeeks; we were the only stop on the tour where the Warre hive was being practiced. We had lots of great discussion with people interested in our hive.

More public outreach was practiced for composting education and volunteer opportunities through the Master Composters of Bernalillo County. Becoming a certified Master composter this past year required a certain amount of volunteer hours after taking the class and passing an exam.  My volunteer hours were met through information booths at various public events, teaching opportunities at local gardening nurseries and also at public libraries. Meeting new people and sharing what I have learned about composting were very rewarding. I really loved these events and look forward to helping out again with them this coming year.

Public recognition for our urban farm was in the medias of print and TV. By far the most entertaining of the two were the television/YouTube productions by Landscaping Southwest tv on us. There were three different shows produced on us with one being an entire episode on 7HH-G. We were able to meet Kristine and Kyle from the show – two great people sharing their enthusiasm on landscaping efforts here in the southwest. The first show aired April 24, 2015 and focused on all of the urban farming efforts of our family. The second show was released on June 20, 2015 and included us on a show about composting. And the last show with us was one on July 3, 2015 and focused on irrigation. You have to take a look at the shows and see for yourself how much fun we had with these projects. Finally , our urban farm was part of a story in our local paper , the Albuquerque Journal, Life in New Mexico section, Week of July 19-25, 2015. The story was titled “Urban Homesteaders – Group supports local homeowners’ efforts on their path to sustainability and self-reliance”. Fellow urban farmer and Master composter Brad  Weikel was hi-lighted in the write up as well.

Whether it was at a conference with like-minded farmers or beekeepers, at a public teaching event or interfacing with numerous online Friends thru our Facebook page, learning, talking and educating others about our urban farming efforts has been immensely rewarding for our family this past year and we’re looking forward to more opportunities in 2016 !

This entry was posted on December 25, 2015 by sam3abq in Beginnings, Recap posts.

Causing dialogue and eliciting responses about living design while presenting various observations for critique, consideration, solutions and some good humor!

My southern style of living through gardening, cooking and diy projects. Stop by often to see what I am digging into during my free time.

Living off the land when the land is a small suburban lot.

Bees, Hives, Swarms, and Everything under the Sun

Exploring sustainability in Sydney, and down south

Sharing the often fun, sometimes tragic but always fabulous life in the country!

A dive into all things feathered and farming...